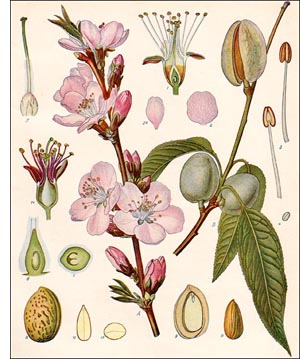 The Almond is the fruit of a small tree belonging to the Rose family. The plant is believed to be a native of northern Africa, Persia, and Turkestan. It occurs wild in Sicily and Greece and is cultivated throughout temperate Europe, including England.

The leaves of the almond tree are simple, broadly lanceolate, margins serrate, bright green, and stalked. The flowers are nearly sessile, mostly solitary, petals bright pink; otherwise similar to the flowers of the rose family as seen in the apple blossom, cherry blossom, and the wild rose. The fruit is a drupe or stone fruit, resembling the peach in its general structural characters. It is, however, much smaller, measuring about one and one-half inch in length.

As in the peach, the outer portion of the fruit coat is fleshy, the inner portion is hard and encloses the kernel or seed to which the term almond usually is applied.

The plant is very ornamental, producing its beautiful flowers in March, before the leaves are developed.

Two natural varieties of almonds are quite universally recognized-the sweet and the bitter. They resemble each other so closely in general appearance that it is practically impossible to distinguish between them. The principal difference lies in the chemistry of the kernels or seeds themselves. In the bitter variety amygdalin is found, which is practically wanting in the sweet variety.

At the present time the sweet almond is extensively cultivated in northern Africa, southern Europe, and in the warmer parts of the United States, particularly in California. Climatic conditions and cultivation has a great influence upon the quality of the almonds, and we have as a result quite a number of commercial varieties, just as we have commercial varieties of coffee, tea, oranges, etc. The more important commercial varieties are the Jordan, Valencia, Barbary, and California almonds.