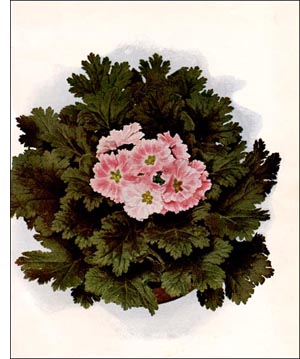 Among the many beautiful blossoms to be found in the field, the forest, or the garden, probably none have served to inspire the poet more than the Primrose and its near relative, the English cowslip.

Someone has said that "no flowers typify the beautiful more strongly than those of the primrose, which, though showy, are delicate and seem inclined to retire to the shade of the plant's leaves."

These plants belong to the primrose family, which includes twenty-eight genera and over three hundred and fifty species. Nearly all are natives of the Northern Hemisphere, some being found as far north as Greenland (the Greenland primrose).

Some of the species are Alpine, and a few are found in the southern portions of South America and Africa. One of the most interesting wild species of this family is the shooting star, or American cowslip, which grows abundantly on the prairies of the eastern portion of the United States.

The family, as a whole, seems to have no economic value of importance and are of use to man simply to beautify his surroundings. Many of the species are very interesting to the scientific observer, for the structure of their flowers is such that they are peculiarly adapted for cross-fertilization. This character has made it possible for the floriculturist to produce many of the beautiful forms that are found in cultivation.

The common or English primrose, by careful culture, produces a wonderful number of variations. The wild forms produce only yellow single flowers, while from those under cultivation are developed numerous varieties, both single and double, which vary greatly in color-red, pink, white, purple, and many shades of each.

The cowslip primrose is also a native of England. The flowers are yellow and nodding, and the plants emit a strong odor of anise.