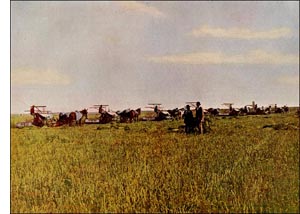 The classification of the different varieties of cultivated Wheat has occupied the attention of many botanists and agriculturists. A good selection of seed, according to the nature of the soil, demands intelligence and accurate knowledge on the part of the farmer.

If a good variety be grown in poor soil, the result will be unprofitable, while if bad wheat is grown on good soil, the result may be nil. *In botanical collections there exist, it is stated, herbarium specimens or other evidences of plants grown in Norway as far north as latitude 65 degrees, in Switzerland at an elevation of 1,200 feet above the Valley of Zermatt (or 6,500 feet above the sea), near the Straits of Magellan, as well as in Teneriffe, the Cape of Good Hope, Abyssinia, Rodriguez, the Philippine Islands, and the Malay Archipelago.

These widely separated localities show the great area over which the culture is possible, and illustrate the powers of adaptation of the plant. The requirements of the consumer also have to be considered; for some purposes the soft wheats, with their relatively large proportion of starch, are the best; for others, the hard wheats, with their larger quantity of gluten.

With the modern processes of milling, the hard wheats are preferred, for they make the best flour; and in North America the spring wheats are harder than the winter wheats. The soft wheats are those which are most general in European cultivation, and, as a rule, the beardless varieties, though more tender, are preferred. The bearded varieties are supposed to be hardier; at any rate, they defy the ravages of predatory birds more completely than the unarmed varieties, and they are preferable in countries liable to storms of wind, as less likely to have their seeds detached.

Hard wheats are specially employed in Italy for the fabrication of macaroni. Polish wheat is used for similar purposes. Spelt wheats are grown in the colder mountainous districts of Europe; their flour is very fine, and is used especially for pastry making, but, owing to the construction of the grain, it requires special machinery for grinding.

The numerous varieties of wheat now in cultivation have been obtained either by selection or by cross-breeding. In any wheat field there may be observed, on close inspection, plants differing in character from the majority. If seeds of these " sporting " plants be taken and grown in another season, they may (or may not) reproduce the particular variation. If they do, and the same process of selection be continued, the variation becomes in time " fixed," though it is always more or less liable to revert to its original condition.

The production of wheat, with the use of wheat bread, has increased enormously since the extension of railways has made possible the transportation of grain for great distances by land. Of late years the increase of production has been most notable in southern Russia, Australia, India, and North America.