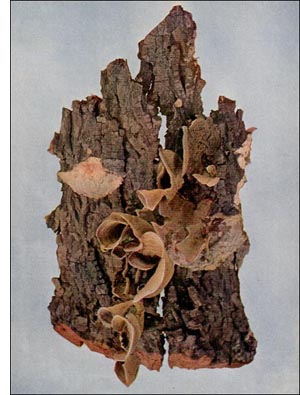 The plants known as Bracket or Shelf Fungi are familiar objects to every lover of nature who frequents our groves and forests.

Beginning as small, slightly elevated protuberances, or flat, orbicular patches on the bark of a dead tree trunk, log, or stump, they gradually increase in size and assume more or less definite shapes. Some never attain a breadth of more than a third of an inch, while others may ultimately obtain a width of nearly a foot and one-half, and project fully one-half that distance from the surface of the matrix. The most common form, perhaps, is that of a semicircle, the fungus being more or less flattened and attached by its straight edge to the log or stump.

Sometimes the edges are upraised so as to form cupshaped growths. Several kinds are so thickened that they nearly resemble a horse's hoof in form, while a few others, although classed as " brackets," are merely amorphous masses appearing in a knot hole or wounded place in a log or stump.

The fungus which we illustrate occurs on the trunks of various trees in Canada, the United States, and in Mexico. The plants grow in tufts or clumps. The pilei or receptacles are leathery and thin. At first they are plain; later they are often recurved at the edges. They are villous, with brown, shining zones, and the bases are narrowed and substipitate. The hymenium or fruit-bearing surface of each plant has a pallid brick color, sometimes with reddish or lilac tints. The specimens figured are proliferous; that is, new pilei arise from the edges of those of the preceding season.