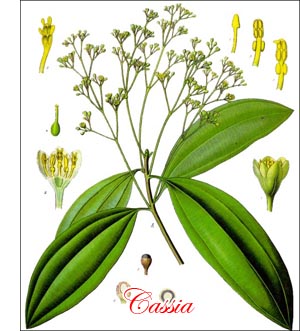 The cassia tree of southern China (Cinnamomum cassia) is closely related to the true cinnamon and is said to have been used since 3000 B. C. in China as a substitute for cinnamon. The tree attains a height of 25 to 50 feet and closely resembles in appearance the true cinnamon tree. Cassia bark was used as a spice in various countries long before true cinnamon was employed for that purpose.

The best grade of Chinese cassia bark, or cassia lignea, is nearly as aromatic as true cinnamon and may be used for the same purposes. Young trees are cut down at the age of 6 years and the branches harvested for their yield of bark. The bark is slipped from branches about 1 inch in diameter and flattened out, after which the epidermis is removed with a plane. The bark is then dried for a period of about 24 hours and baled.

All parts of the plant may be used for distillation of cassia oil. The dried unripe fruits, called cassia buds in trade, are much used in the place of cinnamon. The United States imports about 6,000,000 pounds of cassia bark annually. In China there are approximately 60,000 acres devoted to the cultivation of cassia. The yield averages 1 1/2 tons per acre every 6 years.

The fallen leaves have been found to be just as aromatic as the freshly picked leaves. It is only necessary, therefore, to have a tree or two in the dooryard to furnish a continuous supply of flavoring material for home use.