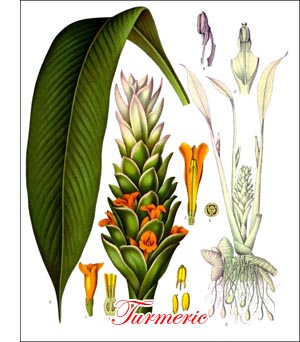 The commercial spice product turmeric is obtained from a perennial herb (Curcuma longa) belonging to the same family with ginger. The plant is a native of Cochin China but is now propagated everywhere in tropical Asia. Turmeric reaches a height of 2 or 3 feet and bears long lanceolate leaves in tufts of 6 to 10.

The white or yellow flowers are borne in scaly, conical spikes. The rootstocks are thick, scaly, and ringed, and of a bright orange color. In India, about 60,000 acres are devoted to the production of turmeric, chiefly in Bengal, Madras, and Bombay. The most of the turmeric in the trade comes from Madras and Bengal.

Turmeric is propagated by division of the rhizomes, or roots, much as in the case of ginger. The plants are commonly cultivated in ridges or raised beds and the yield is about 2,000 pounds per acre.

In harvesting this crop the roots are washed, heated in earthenware pots, and then dried in the sun for a week or more. In India, turmeric roots are used fresh in the preparation of curry. Dried turmeric is used in curry powder and for coloring pickled preparations and sweet meats. Turmeric is also employed to some extent as a dyestuff.

A number of other species of the same genus, Curcuma aromatica, Curcuma caulina, Curcuma angustifolia, and Curcuma amada, have been used as a source of starch, spice, condiment, dyestuff, cosmetics, and drugs. Zedoary (Curcuma zedoaria) was once quite widely used as a spice but is now employed only by the natives of East Indies in curry powder.

The lesser galangal (Alpinia officinarum), belonging to the same family, produces red roots. This plant is cultivated only in China. It is used in Russia in medicine and for flavoring beer, vinegar, and liqueurs. The greater galangal (Alpinia galanga) is cultivated in Malaya and Java. It develops a very large root with a buff flesh which is used in curries and native medicine.