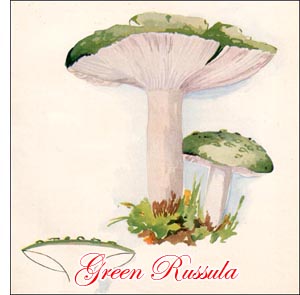 There are few more useful, more easily recognized, or more delicious members of the vegetable kingdom than the common Mushroom. It grows in short grass in the temperate regions of all parts of the world.

Many edible fungi depend upon minute and often obscure botanical characteristics for their determination, and may readily be confounded with worthless or poisonous species, but that is not the case with the common mushroom, for, although several other species of Agaricus somewhat closely approach it in form and color, yet the true mushroom, if sound and freshly gathered, may be distinguished from all other fungi with great ease.

It almost invariably grows in rich, open, breezy pastures, in places where the grass is kept short by the grazing of horses, herds, and flocks. Although this plant is popularly termed the " meadow mushroom," it never, as a rule, grows in meadows. It never grows in wet, boggy places, never in woods or on or about stumps of trees.

An exceptional specimen or an uncommon variety sometimes may be seen in the above-mentioned abnormal places, but the best, the true, and common variety of our tables is the product of short, upland, wind-swept pastures. A true mushroom is never large in size; its cap very seldom exceeds four, at most five, inches in diameter.

The large examples, measuring from six to nine or more inches across the cap, belong to Agaricus arvensis, called, from its large size and coarse texture, the Horse Mushroom, which grows in meadows and damp, shady places, and, though generally wholesome, is coarse and sometimes indigestible.

The mushroom usually grown in gardens or hotbeds, in cellars, sheds, etc., is a distinct variety, known as Agaricus hortensis. This is a compact and inferior form of the true mushroom, or it may indeed be a hybrid or even a distinct species.

The parts of a mushroom consist chiefly of stem and cap; the stem is furnished with a clothy ring around its middle, and the cap is furnished underneath with numerous radiating colored gills. When a mushroom is perfectly ripe and the gills are brown-black in color, they throw down a thick, dusty deposit of fine brown-black or purple spores ; it is essential to note the color.

The spores, on germination, make a white felted mat, more or less dense, of mycelium; this, when compacted with dry, half-decomposed dung, is the mushroom spawn of gardeners. The stem is firm, slightly pithy up the middle, but never hollow; it is furnished with a floccose ring near its middle ; this ring originates by the rupture of the thin general wrapper of the infant plant. On being cut or broken, the flesh of the true mushroom remains white or nearly so, the flesh of the coarser horse mushroom changes to buff or sometimes to dark brown.

To summarize the characteristics of a true mushroom : It grows only in pastures ; it is small in size, dry, and with unchangeable flesh; the cap has a frill; the gills are free from the stem; the spores brown-black or deep purple-black in color, and the stem solid or slightly pithy. When all these characteristics are taken together, no other mushroom-like fungus can be confounded with it.