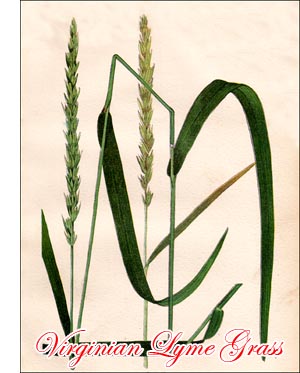 Virginia Lyme Grass is perennial with a very short rootstock and therefore grows in dense tufts. The stems, which are generally from two to four feet high, are numerous and densely crowded, smooth and rather slender, leafy to the top and often tinged with purple. The leaves are long and broad, the colour varying from bright green to glaucous. The lower leaves soon become brown and dry and at flowering time are usually all dead. The flowers are in a spikelike inflorescence.

The spikelets are not solitary at each joint, as in the genus Agropyron, but are generally in pairs, making the inflorescence dense and crowded. Each spikelet has two sterile glumes at its base and there are consequently four sterile glumes at each joint. They are thick and clawlike, bent below, and make a characteristic mark by which Virginia Lyme can be easily distinguished from other Lyme Grasses.

A spikelet contains two or three flowers, each enclosed within two narrow glumes. The outer flowering glume, the lemma, is awnless or with a short awn at its tip. When the awn is present the whole spike somewhat resembles that of rye; when it is absent the spike is more like that of wheat-hence the names Bald Rye Grass and Wheat Grass.

Virginia Lyme Grass is indigenous to practically the whole North American continent. In Canada it extends from Nova Scotia to the Rocky Mountains.

It occurs on river banks, along borders of woods and thickets, etc. It is rather common in open woodlands but rare in open ground. This is why it is more frequent in the Maritime Provinces, Quebec and Ontario than in the Prairie Provinces.

Virginia Lyme Grass stands drought and severe cold without injury and makes quite a vigorous growth on light, dry soil where many other grasses give a poor return.

Its agricultural value is rather doubtful. It is nutritive and succulent when young, but it quickly loses its feeding value and palatability as it gets woody and the basal leaves soon dry up and turn brown. If intended for pasture it should therefore be grazed early, and if grown for hay it should be cut quite green-long before the plants have started to flower. Its value as a pasture or hay grass is considerably lessened by its inability to produce a reasonable second growth.

When sown alone, fifteen pounds of seed should be used to the acre.