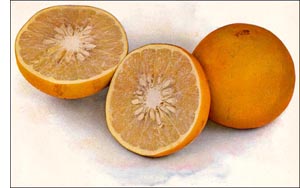 The Grape Fruit is a species of the genus Citrus, which also includes the orange, lemon, lime, and citron. Accounts vary regarding its origin, but it is generally supposed to be a native of the islands on the southern coast of Asia.

The grape fruit is really a monstrous orange. The fruit is from four to eight inches in diameter, and, while in China and Japan its sweet taste has given it the name of sweet ball, as a rule the pulp and juice are sub-acid, or bitter, but withal quite refreshing.

The grape fruit, like all forms of extra development, is more showy than useful. It flourishes in tropical and in sub-tropical countries which are not liable to frost, being far more sensitive to cold than is the orange. Florida seems peculiarly well adapted to the cultivation of this fruit, as well as the varieties used for ornamental purposes only.

The tree is a beautiful evergreen with dark shining leaves, against which the clusters of greenish-yellow fruit, which are found on the tree in various stages of development at all seasons of the year, produce a most pleasing and ornamental effect.

The grape fruit trees attain a height of from fifteen to twenty-five feet. The heads of the trees are spreading and the branches armed with prickles. The leaves are somewhat downy underneath and the winged petiols are nearly as broad as the leaves. The white flowers have five petals and five sepals, and the fruit, which is a berry, may attain a weight of fourteen pounds.

The term grape fruit is derived from the fact that the fruit grows in clusters of from three to fifteen, thereby suggesting clusters of grapes.

The trees of the grape fruit are not as liable to disease as are the orange trees. Insects and scales do not attack them to any material extent, and this immunity, together with the advantage of being able to raise the trees from seeds, has tended to the development of many varieties, some of which are of great commercial value.