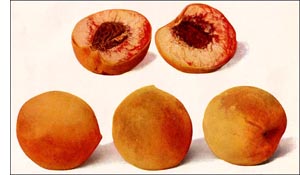 The Peach is one of the most important and best-known fruits.
It is not found in the wild state in its present form, though in some localities it propagates itself, having escaped from cultivation.

It is probably a native of China, where it has been cultivated for centuries and where it is said to reach its greatest perfection.
The number of varieties seems to be unlimited. Ov-er four hundred have been catalogued, though less than one hundred of these are constant. The nectarine is considered a variety and closely related to the peach and the plum, the apricot, and the cherry.

The tree itself, when bearing its beautiful rose-colored, five-petaled flowers, is highly ornamental. It seldom grows higher than twenty feet and its branches form a symmetrical top. One very ornamental variety produces double flowers and bright, shining leaves, but no fruit.

This valuable plant is generally placed in the family Rosaceae, which includes many species of economic and ornamental importance. Besides those already mentioned, here belong the rose, the strawberry, the raspberry, the blackberry, the apple, the pear, and the quince, as well as many beautiful wild forms.

The thousand or more species usually classed in this family may be readily separated into distinct groups, to which are given distinct family names by some authorities. Thus, the peach, the cherry, the plum, and the almond, which resemble each other in regard to the structure of their fruits and in their chemical constituents, may be placed in a family by themselves.