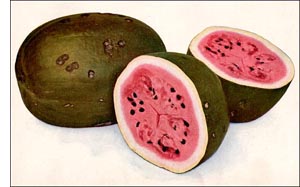 The Watermelon is a native of Africa. In fact, Livingston states that in Africa large areas are covered by the plants growing in a wild state, and in New Jersey and Long Island, where large fields are devoted to its cultivation, the plants show a marked tendency to spread spontaneously.

The watermelon belongs to an eminently respectable but not a particularly aristocratic family. Its near relations are the gourd, the cucumber, the pumpkin, and the squash. There is probably no country in which this fruit is so largely cultivated as in the United States, its habitat being limited, however, to the southern and middle portions of North America to the fourth degree of latitude. The short seasons of the more northern states are unfitted for the complete development of the fruit.

It is peculiar in the fact that it yields no important by-products, with the exception that its saccharine matter may be converted into sugar. The juices of the fruit cannot be converted into wine or vinegar, and, unlike the cantaloupe, it does not produce a good brandy when distilled.

The plants are annual, trailing, slender vines extending from eight to fifteen feet. The leaves are five-lobed, from three to six inches in length, and in dry countries the plants often supply vegetation when all others are dried up. The leaves are possessed of an unusual perspiratory power, hence they require a greater amount of moisture than the majority of plants, the roots often extending a considerable distance to reach water.