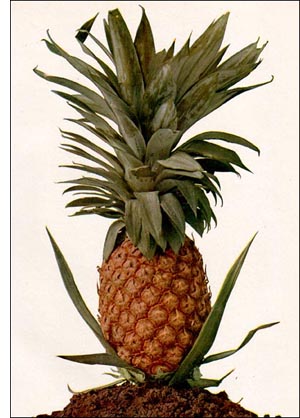 This tropical fruit is so called from its resemblance in form and appearance to the cones of some species of pine.

The Bromeliaceae, to which it belongs, are a small family of endogenous plants, quite closely related to the canna, ginger, and banana families, and differing from them in having nearly regular flowers and six stamens, all perfect.

As the Pineapple has become naturalized in parts of Asia and Africa, its American origin has been disputed, but there is little doubt that it is a native of Brazil, and perhaps some of the Antilles, now a part of the domain of the United States. This fruit is a biennial, with the habit of the aloe, but with much thinner leaves.

In cultivation it early produces seeds, but in ripening the whole flower cluster undergoes a remarkable change ; all parts become enormously enlarged and, when quite ripe, fleshy and very succulent, being pervaded by a saccharine and highly flavored juice. Instead of being a fruit, in the strict botanical sense of the term, it is an aggregation of accessory parts, of which the fruit proper forms but a very small portion.

The first pineapples known in England were sent as a present to Oliver Cromwell; the first cultivated in that country were raised in about 1715, though they were grown in Holland in the preceding century. The successful cultivation of the fruit was early considered one of the highest achievements in horticulture, and the works of a few years ago are tediously elaborate in their instructions; but the matter has been so much simplified that anyone who can command the proper temperature and moisture may expect success.