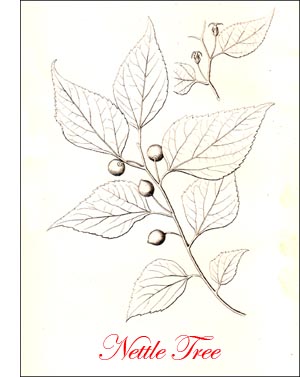 It is easy to mistake the hackberry for an elm. The habit of the two trees leads the casual observer astray. It takes a second look to note the finer spray of the hackberry twigs, its more horizontal, less drooping branches. The warty bark is characteristic. The little axillary sugar berries are very different from elm samaras. There are few months in the year when fruits are not to be found, green or ripe, on the tree. They are the delight of birds throughout hard winters. A peculiarity of the foliage is the apparent division of the petiole into three ribs instead of a single midrib. Otherwise the leaf is elm-like, though smaller and brighter green than that of the American elm.

The hackberry is not familiarly known by people in the regions where it grows. Else it would be transplanted more commonly to adorn private premises and to shade village streets. There is no danger in digging up well-grown trees, for the roots are fibrous and shallow, and carry an abundance of soil with them.

The beauty of the hackberry's graceful crown is sometimes marred by a fungus which produces a thick tufting of twigs at the ends of branches. These are called "witches' brooms." Growths of similar appearance are produced by insects on other trees.