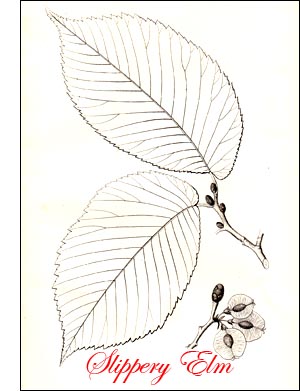 The slippery elm disregards the laws of symmetry. Each limb strikes out for itself. It is not unusual to find a tree quite one sided in form. Shoots 6 feet in length are often seen as the growth of a single season, where a broken limb gives an ambitious bud a chance. The roughness of its foliage to the touch is one of the striking characteristics of this tree. The leaves are covered with harsh, tubercular hairs, and the crumbling of a leaf grates most unpleasantly on the ear. Then, there is a tawny pubescence on young shoots, and especially on the bud scales of this elm. In winter this is the best distinguishing mark of the red elm. The large flower buds are below the pointed leaf buds on the youngest shoots.

The bark is brownish grey, and rough alike on trunk and branches. Everything, in fact, about the slippery elm seems coarser than in its relatives. The leaves are often 8 to 10 inches long on vigorous shoots.

Under the bark is a mucilaginous, sweet substance that gives this elm its common name. What man lives who in the heydey of youth has not had the spring craze for slippery-elm bark, as surely as he had the chicken pox and the measles! The trees in every fence row show the wounds of many, a jack-knife, for in the spring its cambium waxes thick and sweet and fragrant--to growing boys, a delectable substance that allayed both hunger and thirst. Fortunate for the longevity of the individual trees, the bark of the limbs is most easily stripped off, so many a veteran supplies boys to-day, which served as well a former generation. The bark, dried and ground, mixed with milk, forms a valuable food for invalids. Poultices are made of it to relieve throat and chest troubles. It is also useful in allaying fevers and acute inflammatory disorders. This bark, first used as a home remedy, has now an established place on the apothecary's shelf, and is used by physicians of both schools. The problem of the supply is a serious one. The tree grows fast and vigorously if only the boys give it a chance. The trees are becoming scarcer each year.