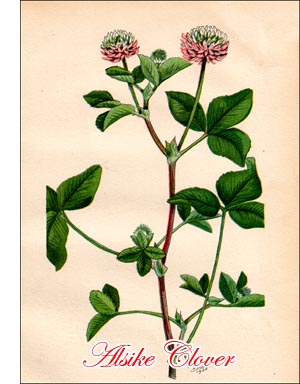 Growing Alsike for seed is quite a profitable business where conditions are favourable. The plants produce a large number of heads and the flowers are pretty certain to be fertilized as both bumble bees and ordinary honey bees are at work. The soil should contain a reasonable amount of lime, potash and phosphates and must not be too wet. Very moist soil produces rank growth and plants liable to lodge. As a result the seed crop will be comparatively light and of poor quality. The seed is generally secured from the first crop. Sometimes the fields are clipped or pastured early in the season. This delays ripening but enables the plants to be better stocked and to produce a larger amount of seed. To prevent lodging, which lessens the seed on the prostrate branches, as much as six pounds to the acre is sometimes sown with good results. This heavy seeding is recommended by seed growers for heavy, comparatively moist soil.

Alsike is ready to cut for seed when most of the heads are brown and the flowers can be easily stripped off. As the blossoms fall off separately when the seed is ripe, care in harvesting is necessary to prevent shelling. The danger is greatest when the heads are perfectly dry and it is therefore advisable to cut when the plants are wet with dew. For the same reason the subsequent handling of the crop must be careful. The threshing should be done during dry weather. As a rule, only one crop of seed is taken from a field; sometimes, however, seed can be advantageously harvested for two or even three successive years.

Commercial seed in bulk is greenish or yellowish, or sometimes very dark. Every sample contains different coloured seeds; some of them are yellowish green, others almost black, but the bulk is intermediate between these two extremes. As in Red Clover, these different colours do not generally indicate that some seeds are riper than others. Alsike, like Red Clover, consists of a great number of types, which differ not only in the general appearance of the plants but also in the colour of the seed. If all the seeds from a single plant are collected, it will be found that, irrespective of age, they are all the same colour. In some plants the seeds are yellowish green, in some they are black, and in others they are green at one end and greenish black at the other. The mixed colour of an ordinary sample is therefore as a rule not due to the seed having been gathered at different stages of development, but to the different types that are mixed together.
The legal weight of a bushel is sixty pounds.

Alsike as a rule contains more weed seeds than does Red Clover, this being due to the fact that Alsike seed is taken from the first crop, whereas Red Clover is secured from the second. The noxious weed seeds found in Alsike are Night-flowering Catchfly, Bladder Campion, Canada Thistle, False Flax, Curled Dock and Ribgrass. Other weeds common in it are Green Foxtail, Lamb's Quarters, Sheep Sorrel, Mayweed and Chickweed. Although Black Medick cannot be considered a noxious weed, it is an undesirable impurity when it is as common as it often is in Alsike.