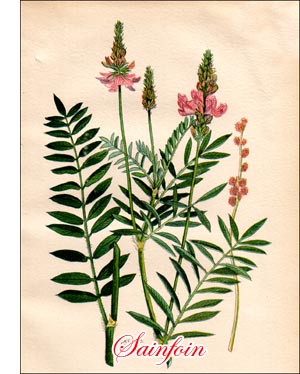 Old fields which give a comparatively small yield of hay give the best crop of seed. It is ready to cut when the pods are bright brown. Late cutting causes considerable loss as the old pods easily fall off, even with the most careful handling.

Commercial seed is almost always unshelled; that is, the seeds are enclosed in the pods. The pods are almost semi-circular and somewhat flattened, about an eighth of an inch long and a little less in width. Their surface is covered with a meshlike netting, which stands out in bold relief and is frequently armed with scattered spines.

The outer edge of the semi-circle is flattened into a well-defined rim with strong, sharp teeth. Well-ripened pods are reddish-brown and have a characteristic metallic lustre, especially when not too old. The unshelled seed weighs about twenty-six pounds per bushel. The real seeds, of which there is only one in each pod, are kidney-shaped and olive-brown to chestnut.