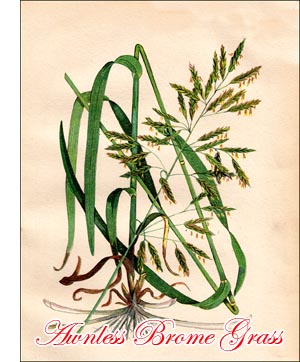 Awnless Brome Grass is perennial with a creeping rootstock which produces numerous scaly runners. These are a kind of underground stems, the leaves of which are reduced to mere scales. They are much branched, root at the joints and produce numerous upright stems of the ordinary type. The runners being long and widely creeping, the upright stems produced from them are scattered and the plants are therefore not tufted but form loose mats. This is especially the case in light, loose soil.

The stems are numerous and rather stout. They are from one to four feet high and carry many spreading leaves. These are long and broad, smooth, and vary from light to dark green. The panicle is generally large with branches spreading in all directions. After flowering it usually becomes narrow and sometimes one-sided with nodding branches.

The spikelets, which are about an inch long. are generally brownish-red when old. One spikelet contains seven to nine flowers, each enclosed by two more or less blunt glumes. The grass is called Awnless Brome because the outer glume of the flower has no awn, although occasionally forms are found which have awned glumes, like most other species of the genus.

Awnless Brome Grass is a native of central Europe and Asia, extending from Holland and France to China. Although its range of distribution is very wide, the wild form occurs in rather scattered localities. In recent years, however, it has been introduced in a great number of places and is now fairly common in practically all European countries. It was introduced into Canada about twenty years ago and is widely distributed, especially in the Prairie Provinces.

It grows naturally in dry, gravelly places, on riverbanks and hills, along borders of woods, etc., and more rarely in meadows.

Awnless Brome Grass does not require a heavy, good soil but thrives on loose and comparatively poor land where more valuable grasses would make a poor stand. Although it succeeds in medium wet soil, it is generally used where moisture is rather scarce. It is highly prized on account of its drought-resisting qualities; in dry summers it produces more green feed than any other grass. Especially in those parts of the Prairie Provinces where the rainfall is light, Awnnless Brome Grass is desirable. It is adapted to western Canada on account of its hardiness and its ability to stand sudden and great climatic changes. It is extensively grown in Hungary, where the climate is much like that of the Canadian west.

Like most other perennial grasses, Awnless Brome Grass grows rather slowly the year it is sown. The second year the crop is heavy and the third year it usually reaches its maximum. Owing to the great stooling power of the rootstock, the ground soon becomes sod-bound and it is necessary to renew the field in order to keep up the yield. When once established it is persistent and thorough cultivation is required to suppress it. It starts growth early in spring and keeps on producing stems and leaves until late in fall.

Its ability to furnish green feed, even in a hot, dry summer, makes it valuable for pasture, although its nutritive value cannot be compared with that of Kentucky Blue Grass, for instance. Its indifference to the tramping of cattle and sheep makes it especially important in sandy and gravelly pastures.

Although opinions of the feeding value of the hay differ, it is safe to say that it can scarcely be compared to medium quality Timothy. In a dry climate it is generally advisable to sow it alone for hay and without a nurse crop. Ten or twelve pounds of seed to the acre have been found sufficient at the Indian Head experimental farm. More seed will give a better crop the first year but less afterwards, as the roots thicken up and produce a dense sod.
It should be cut before flowering as it becomes hard and less palatable after that and loses much of its nutritive value. Under favourable conditions, two crops of hay can be secured during the season, the second, however, being rather light and consisting chiefly of leaves. The hay is relished by all kinds of stock. It may be fed for milk as well as for beef production. On account of its laxative properties it is less suitable for working horses.