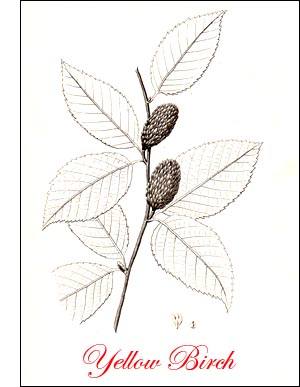 There is no denying the inferiority of the wood in most species of birch. The toughness and durability of the bark prevent the prompt evaporation of the abundant sap, which ferments and breaks down the wood cells. It is not uncommon to find in the woods a birch trunk with the bark intact, but the wood crumbling like chalk when touched. When the trees are stripped of their bark immediately, after being cut down, the wood seasons properly and lasts fairly well as lumber.

There are twenty-eight known species of the genus Betula distributed over the Northern Hemisphere, and a fugitive species grows in Terra del Fuego! Ten of these are North American, seven or eight Asiatic, and six European. The white birch of Europe extends through Asia to Japan, and is cultivated in many varieties in America.