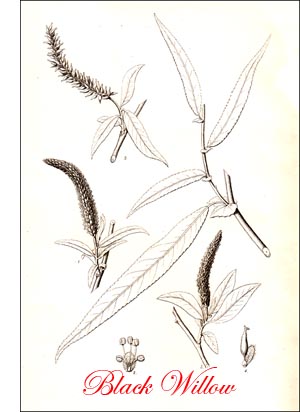 The genus Salix is distributed from the equator to the Arctic circle. It embraces 170 species, beside numbers of natural hybrids between closely related species. Most of them prefer moist soil; a few prefer dry. They ascend from sea level to the tops of mountain chains. They vary from great trees to prostrate shrubs. No climate or soil but can show its native willows. Among woody plants they are comparable to grass among the herbs.

The wood of willow is uniformly light and weak. The trees are likely to get less than their due of credit, when compared with the average large genus of hardwoods or conifers. But uses have been found for them from time immemorial. Their soft, light wood makes superior charcoal for gunpowder and other uses, and is largely used for summer fuel where a quick, hot fire is desirable. The tough, flexible twigs of several species form the basis of the wickerware industry. Tannin is obtained from the bitter bark. In Holland and other countries willows are planted to hold the banks of streams and ditches. Willow branches formed the original jetties that opened and kept open to navigation the channel of the Mississippi. Willows are among our best trees for quick-growing shelter belts, in the newer parts of the country. They furnish ornamental and shade trees of value-pretty when young, dignified in age.

The cultivation of willows is very easy. A twig stuck into moist soil grows into a tree. Willow posts set out green soon grow into roadside trees, thus serving a double purpose. in damp situations their roots drain and greatly improve the land. Many species have twigs that snap off at the base. These twigs strike root if they fall on damp ground; many waterside willows cast their twigs in this way, and the stream carries them down, lodging them on shoals and bars, which soon become clothed with trees. It is an unmeasured advantage to a region to have its shifting sands and mud banks established thus, and covered with green.

There are comparatively few willows that grow into large trees. The rank and file of trees even in these species are small. From Europe we have naturalised two large species, S. alba and S. fragilis. The golden osier, whose yellow limbs are bright in early spring in many a fence row, is called var. vitellina of S. alba, the white willow of Europe. The Babylonian willow, Salix Babylonica, is the much-planted weeping willow of the Eastern States. Var. dolorosa is the popular "Wisconsin Weeping Willow." One of the best ornamental willows is S. pentandra, the laurel willow, whose crown of glossy, broad, green leaves adorns many parks. This species is coming into well-deserved popular favour. 'I he Kilmarnock Willow is a weeping horticultural variety, pendula, of S. Caprea, Linn., the European goat willow. The staminate tree is loaded in spring with catkins which are coarse and ugly compared with those of our own pussy willow, S. discolor.