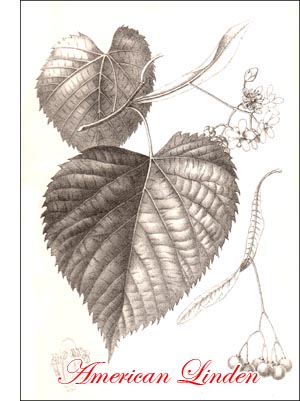 The genus Tilia, comprising sixteen recognised species, ranges widely in the Northern Hemisphere, omitting only central Asia, the Himalaya district, and western America. It belongs to a tropical family of which it is the only northern representative. America has three Eastern species and one confined to Mexico. Three other little-known forms have been recently admitted to the rank of species by Professor Sargent.

In classical literature and in folk lore the lindens have an honoured place. In the south of Europe the impressionable Greeks and Romans loved them for their beauty and their honeyladen flowers. The hives of Hybla were sung by poets, and the honey from the linden trees in the Lithuanian forests brought a price three times as large as any other. Linnaeus had his name, Carl Linne (afterward Carolus Linnaeus), from a favourite linden tree that stood by his peasant father's house.

Scarcely a part has a linden tree that is not turned to good use. Its fagots make the best of charcoal. The leaves are used, fresh and dry, as fodder for cattle. The flowers furnish nectar to bees, and are distilled by makers of perfumes. An infusion of fresh flowers has long been used as a remedy for indigestion, nervousness, and for coughs and hoarseness.

The seed balls are full of oil which is esteemed equal to olive oil for cooking and table use. This oil is also used in perfumeries. The bark of young trees makes the shoes of the Russian peasant. Ropes, fishnets and mats are made of this tough "bast fibre" of the inner bark. It was a favourite tying material in nurseries and greenhouses until the more adaptable raffia came in to replace it. Basswood is second only to "tulip poplar" in the wood carver's esteem.

The wood is uniform in colour and texture, does not split easily, and is free from hard knots and minor imperfections. Dryden describes it as:

"Smooth grained and proper for the turner's trade,
Which curious hands may carve and steel with ease invade."

Sometimes basswood is sawed by holding a short section of a log so that it revolves against a saw blade. The wood is thus spirally sawed; that is, a thin, continuous board is made as long as the log, and as wide as the spiral path of the saw from bark to pith.

Sometimes this sheet of wood is 100 feet wide. Steaming and pressing prepare these curved sheets for veneer work. This method practically eliminates waste, both in the sawmill and in the cabinet shop.

Famous old trees in Europe include the Neustadt Linden in Wurtemburg. Its sheltering boughs formed a temple of justice in the Middle Ages. Public questions were discussed under it. It lived to be almost a thousand years old, with a crown over 100 feet in diameter and a trunk 42 feet in circumference. Nearly 200 columns supported it in its dotage.