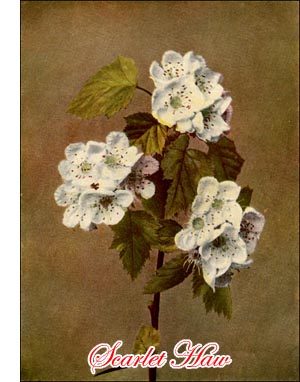 The hawthorns are a shrubby race of trees, under-sized, as a rule, with stiff, zigzag branches, set with thorns. The leaves are simple, alternate, deciduous, usually cut into sharp lobes, and saw teeth. The flowers are generally white, and set in terminal corymbs on side branchlets. The fruits are drupe-like ponies, with bony nutlets containing the seeds. As a rule fruits are red; in a few species they are orange; still fewer, yellow, blue or black. The flesh is generally mealy and dry. The nutlets are joined at their bases, and are variously grooved and ridged.

The stamens are normally five in a circle, set alternate with the petals. There may be five pairs, similarly placed. Or fifteen may occur, in two rows, twenty in three, or twenty-five in four circles. These are the typical arrangements. When not in fives, some stamens have failed to develop. The number of stamens, their arrangement and the colour of their anthers, is considered by Professor Sargent an important clue to relationship. The grooves and ridges on the nutlets form another constant and significant character on which his classification is based.

The generic name, Crataegus, is derived from kratos, the Greek word for strength, and refers to the hard, tough wood.

The centre of distribution for the hawthorns is undoubtedly the eastern United States. From Newfoundland to Mexico they abound in great variety. A few species are found on the Pacific coast and in the Rocky Mountains. Europe and Asia have a few.

It is remarkable that trees so conspicuous as these should until lately be so little known. Linnaeus named four American species. Professor Sargent described fourteen only in Vol. IV. of "The Silva of North America." In Vol. XIII., the supplement, issued in 1900, seventy-three species were added to those described in Vol. IV., bringing his total up to eighty-seven. In his "Manual" published in 1905, Professor Sargent describes and gives rank as species to 128 hawthorns native to the United States. These are divided into eighteen groups by characters set forth in the key. I have chosen a typical species to illustrate each group, and added only such others as have distinction and horticultural promise. The fact that Professor Sargent knows this genus better than anyone else has been my reason for borrowing his key almost unchanged.

The whole story of the hawthorns and their relationships cannot be told by any man now living. Nor can present knowledge and opinion on the subject be considered as final. It takes time to test the stability of species. Thousands of seeds have been collected from haws and planted in the nurseries of the Arnold Arboretum. Probably no such undertaking was ever projected and carried out. What is it all about? Take an example.

A new kind of hawthorn was found growing wild on a hillside within the very gates of the Arboretum. It was evidently related to C. mollis, but was considered sufficiently distinct to deserve rank as a new species. Professor Sargent called it Cratoegus Arnoldiana. A keen-eyed scientist found the same species growing wild along the river banks at Medford, Massachusetts. Does it grow elsewhere? Nobody knows, yet. Seeds from both groups are growing in the nursery. They have shown their foliage. They will be set out in due time, and ultimately will produce flowers and fruit for comparison with the parent trees. If they are alike and "true to type," the inference is that the species is distinct-set off by clear-cut characters from its near relatives. If, on the other hand, these seedling trees closely resemble C. mollis, rather than their own parents, the variability is evidence against their deserving a distinct name and a place among species. Their seeds must be planted, and seedling trees brought to bearing. What will their testimony be? How will they compare with their parents and grandparents?

It takes years of careful study to find out these things. Accurate records must be kept; each tree has its pedigree and biography written in full in the card catalogue, and a prophecy of its value in cultivation.

Perhaps there are not so many species as are now described. One student of the genus thinks that the virgin forests kept hawthorns suppressed. The clearing of the land gave them a chance. The multitude of forms now seen, he thinks may be seminal variations, due to the more favourable auspices under which the seedling trees now grow. Until recent years, nobody was making observations on the subject. Now, in many regions, this scientific study is being carried on-independently or in conjunction with Professor Sargent. The outcome will be a large body of knowledge regarding the genus.

The horticulturist is beginning to realise the value of the hawthorns. The showy flowers and fruits, the vivid colouring of autumn foliage, and the striking character expressed in winter by the rigid branches and their menacing thorns, give most of these little trees attractiveness at all seasons. Many species are handsome and effective as hedge plants. Fine individual trees for lawn planting are furnished by others. Hawthorns are quick to grow in any soil and situation, and they show the most remarkable improvement when encouraged by tillage and a little fertilising. They do well in heavy clay. They are transplanted easily when young, from the wild; but having tap roots are hard to dig, and less sure to survive transplanting when older. They come readily from seed, though as a rule requiring two years to germinate.