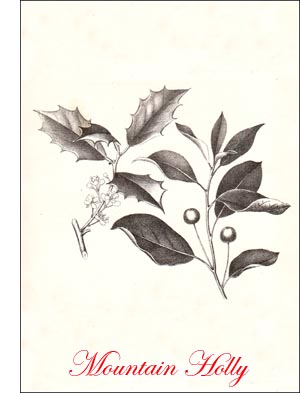 The holly family is distributed in every continent, and ranges from the North Temperate to the South Temperate zones. Many species are tropical. They are all trees or shrubs, the centre of whose distribution seems to be in South America. Of the 175 species, about seventy are found in northern Brazil.

The mate, or Paraguay tea, to which the people of South America are addicted as North Americans are to tea and coffee, is made of the dried and powdered leaves of two holly trees of Paraguay. Chief of these is Ilex Paraguariensis. These are the most important species, in a commercial sense. "Yerba mate" has a remarkable stimulating effect upon the human system, fortifying it for incredible exertion and endurance. Indulged in to excess, it has much the same effect as alcohol.

China and Japan have thirty different species of hollies, some of which are coming into cultivation in America. Europe has but one species. America has fourteen, four of which assume tree form; the rest are shrubby "winterberries."

There are 153 distinct varieties of the European Ilex Aquifolium in cultivation. No more popular ornamental is grown. The Englishman looks out upon his bloomless garden in winter time:

"And sees the clustered berries bright
Among the holly's gay green leaves."

It is more, I think, than a poet's fancy that holly leaves are dull in summer in contrast with other foliage, only to gleam brilliant as polished leather when other broad-leaved trees are bare. The fell-fare, a little thrush, eats these tempting red berries in winter, to the disgust of narrow-minded gardeners.

Ilex is the name by which the holm oak of southern Europe has always been popularly known. Its leaf resembles that of the holly with which it grows in the wild. Linnaeus dropped the old name, Aquifolium (sharp leaf), which the holly had been called.

The European species became Ilex Aquifolium and the oak Quercus Ilex. Its sharp leaf, far more spiny and deeply cleft than that of our species, and the lustrous sheen of leaf and scarlet berry make the European holly handsomer than the American. Its specific name, opaca, meaning dull, reminds us of the inferiority of the latter. Holly and mistletoe are inseparably linked in traditions of the English Christmas. The Druid feasts gave these two plants prominent places in pagan rites, and they have come down to modern times with few changes. Old chroniclers and ballad makers kept the ancient usages fresh in mind, and to-day the English gentleman re-enacts the customs of his forefathers right loyally, as he celebrated Christmas with all his tenantry in the great hall.

"The mistletoe hung in the castle hall
And the holly branch hung on the old oak wall;
The baron's retainers were blythe and gay
Keeping their Christmas holiday."

Away back of the Christian Era, not the Druids only, but the pagan tribes of Continental Europe, especially those under the rule of Rome, sent holly branches to each other as token of goodwill, and decked their dwellings with them in celebration of the feast of the Saturnalia-"the turning of the sun."

The gradual lengthening of the days in late December mitigated the cold which brought so much suffering to rich and poor in the crude dwellings of the times. Yuletide, the feast of the Celtic sun god, Yaioul, gradually and naturally gave way to the later celebration of Christmas. The Aquifolium became the Christthorn, or Christdorn -the "holy tree," afterward called "holly." It was regarded by devout people as a symbol of the Saviour's crown of thorns.

Though only half hardy in the latitude of New York and Boston, many varieties of Ilex Aquifolium are to be found in American gardens, and where necessary are tied up in straw for the winter. The beauty of these little trees amply repays all the care they cost. Just one of the American species, I. opaca, might be confused with this one.

Hollies are multiplied by ripened wood cuttings, by grafting and budding, and by seeds, which germinate the second year after planting. The seedlings require transplanting after their second year of growth. Evergreen hollies must be stripped of all their leaves whenever transplanted. Young trees are moved with comparative safety. The best time is early fall or early spring.

The hollies introduced from Japan include the species I. latifolia, a large tree in its native land, with long, glossy leaves and large red berries in abundance. This is one of the most beautiful and hardy trees in the family. I. Sieboldi, is a slender shrub with dainty leaves and scarlet berries. It is like the native black alder, but smaller in all its parts. Two forms of this species are grown.

Of our native shrubby hollies, the two winterberries, I. laevigata and I. verticellata, are far the most ornamental. The latter is the black alder, found from Canada to the Gulf, and west to Wisconsin and Missouri. Its leaves blacken after heavy frost, but the abundant red berries remain, untouched by birds, late into the winter. It is one of the best of hardy shrubs for winter brightness in the shrubby border. Its fruit-laden branches gathered in the wild are sold for Christmas decorations.