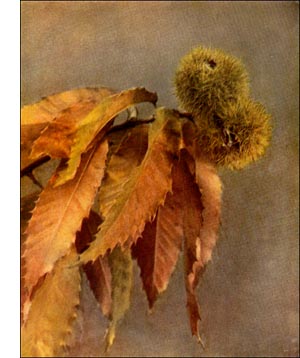 The elegance of chestnut foliage must strike the most casual observer. Each leaf is so long and tapering, so regularly veined and toothed, so polished, and finally so admirably set among the others as to make it a beautiful and useful part of the great green dome that hides the limbs in summer time.

Buds of the chestnut are small and plump set askew on the smooth winter twigs. They open late in spring. The fresh leaves make the neighbour oaks look dingy. The other trees have all done blooming but the lindens and the catalpas when the chestnut dome on the hillside gradually brightens from green to pale gold, and each twig holds up its feathery plume, and waves it, pollen laden, in the wind. July has come, and the fields of grain have passed into stacks and stubble. The chestnut takes on its flower crown to harmonise with the golden midsummer landscape. It is the most beautiful thing in the woods at this time. A solitary tree on a lawn or in a lonesome pasture is a joy to every beholder.

A near view of the tree shows along the bases of certain scantily furnished spikes a few green scaly flowers, with pale yellow threads extended at the tips. These are the chestnuts in embryo, with stigmas reaching out for the pollen that "sets seed." Two or three, or sometimes only one, of these flowers are fertilised. They develop rapidly, and by the middle of August the tree bristles with spiny green globes.

The first frost is the signal for the splitting of the husks into four velvet-lined valves, from which the smooth brown nuts fall. The over-anxious small boy who beats the nuts off earlier wounds his fingers painfully in attempting to force open the stubborn husks. The nuts are not nearly so sweet and rich flavoured as those that wait until the frost unlocks their cells. But boys will never believe this.

The chestnut tree turns to gold again in autumn, and the naked tree stands "knee-deep" in its own leaves all winter. Then its massive trunk, with deep furrowed bark, and the multitude of horizontal branches, striking out from the short central shaft, are distinctly etched against the sky. The small limbs are numerous and contorted, the lower boughs often drooping. Few trees are more attractive in winter.

Chestnuts are among the trees of longest life and greatest trunk diameter. The famous giant at the foot of Mount Etna, the "Chestnut of a Hundred Horsemen" (because it sheltered them all at one time), had a diameter of over 6o feet, and lived to be 2,000 years old. Though hollow, and with its shell in five parts when measured, records showed that a century before it had been a continuous cylinder. Each year these decaying stems wore a crown of green, until an eruption of the volcano destroyed the tree.

In our woods old chestnut stumps 6 feet in diameter and more stand covered with moss and lichens and crumbling to decay, while a circle of fine young trees, each tall and slender, with a diameter of a foot or less, have sprung up from the roots of the old tree. Specimens 10 feet in diameter were not unusual in the virgin forests, though the tallest ones were usually more slender.

The tannic acid in chestnut wood is what preserves it from decay in contact with the soil. Because of its durability it is largely cut for railroad ties and posts. It is well worthy of cultivation as a lumber tree. In woodwork and furniture chestnut is almost as handsome as oak. The chestnut is a valuable nut tree. Had it none of these merits it would still be saved from the saw in many instances because the landscape can ill afford to lose a fine old chestnut tree.