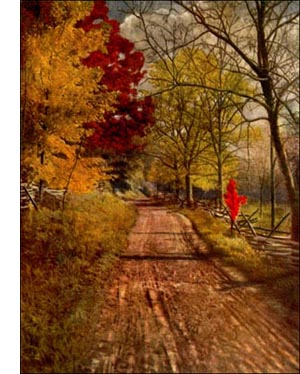 The Hop Tree, or Wafer Ash (Ptelea trifoliata, Linn.) is a pretty, slender tree, widely distributed over this country. From Ontario its range covers the Eastern States from New York to Florida, throughout the Gulf States and north in the forests of the Mississippi Valley into Michigan and Minnesota. A related species, P. angustifolia, found in Mexico, Colorado and California, also occurs in South Carolina and Florida.

It is interesting to ask why this little tree has been so successful in the American forests. We go to the tree for an answer. It chooses to grow in the shadow of taller trees. The seeds are plentiful and vigorous, so bitter no animal eats them, and they are winged for long flight. These are reasons enough for its success in life. Besides, the roots send up suckers.

Warned of its scattering habits, one hesitates to introduce it into a garden. But look at that one! A neighbour has planted it among the high shrubs that form the background of his fine perennial border. From a little distance the pale green fruit masses against the dark foliage remind one of a hop vine in its midsummer glory, but genuine hops are quite unlike the elm-like discs on this hop tree.

There is a satiny sheen on the dainty leaves that make us desire a tree of it for the foliage alone. They look like ash leaves reduced to three leaflets, and given an extra polish by way of compensation. Clean and shiny and circular, the seeds are models of form and finish, and in their tropical abundance they remain to adorn the tree even after the leaves fall.

There is no question but that a hop tree finds its best setting in a shrubbery border, especially where the surrounding greens need lightening. In such company it is a continual delight.

Ptelea was the ancient name of the elm-its seeds look like our elm keys, grown large and plump and smooth. These are sometimes used instead of hops in the brewing of beer, for there is a tonic, bitter principle contained in all parts of the tree, especially in the bark and fleshy roots.

The flowers of the hop tree are numerous in terminal clusters, but they are so small and green they are rarely noticed. They appear in May and June.