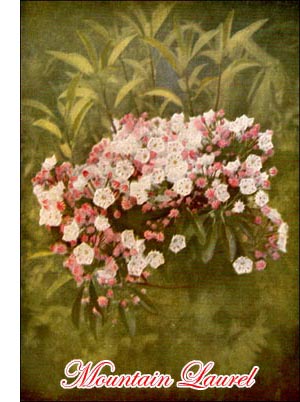 Leaves alternate or irregularly whorled, oblong, tapering at both ends, leathery, stiff, dark green and shining above, yellow-green below; 3 to 4 inches long, on short petioles; evergreen, falling during second summer.

Flowers in large terminal compound corymbs, on viscid peduncles; perfect in June; calyx 5-parted, on 10-lobed disc; corolla, saucer shaped, rosy or white with purple markings in short tube, to tiny pouches below 5-parted border; stamens to, with anthers in pouches, and filaments bent over until time to discharge pollen, when they straighten; pistil 1, with head on long style; ovary 5-celled.

Along with the rhododendrons in June and July the mountain laurel hides its shining evergreen leaves with flower clusters larger than any the rhododendron bears. At least it seems so, for the clusters lie close, cheek by cheek, quite subordinating the foliage, making often a great mass a foot across, upon a single slender branch.

Smaller than the rhododendron in blooms, the laurel shows more exquisite colouring, and more interesting and beautiful forms from bud to seed. First, the buds, little fluted cones of vivid pink, make with the green of the new leaves one of the finest colour combinations to be found in any shrub. The largest ones open first, spreading into wide, 5-lobed corollas with ten pockets in a circle around the base of each. Ten stamens stand about the free central pistil, and the anther of each is hid in a pocket, its filament bent back. This is a curious contrivance, and well worth looking into.

There is a bee lighting on the border, and probing the tube of the corolla for honey. Her clumsiness makes her Nature's agent for the fertilising of these flowers. As she steps on a bent filament, it straightens itself with a spring, the hidden anther is drawn forth and bangs against her furry body, dusting her well with the pollen, which comes in a jet out of a small pore at the top of the anther. The mountain laurel is not self-fertile. Only insects, gathering nectar by the hour, fertilise these flowers. They brush their pollen-laden bodies against the erect pistils, thus bringing about cross-fertilisation wherever they go. A net tied over a mass of blossoms, excluding the bees, will defeat Nature, for the stamens are never released, though the pollen cells are ripe and waiting, as is the sticky stigma in their midst. No seed will be set, though all about, on branches not covered, little flattened green capsules, each waving a curved green wand aloft, ripen their seeds and cast them in the fall.

The mountain laurel is being stripped from its native hills in wholesale quantities: first, by the nurserymen, for the decorative planting of private estates; second, by collectors of Christmas greens. , In the blossoming season the bushes are mutilated by thoughtless persons-collectors who will sell the flowers, and thoughtless, greedy persons who "can't stop picking because they are so beautiful." The present moment is the only portion of time these people consider.

The makers of wooden spoons, ladles, rustic furniture and pipes are despoiling the Southern woods of rhododendron and laurel. The end of these beautiful heaths is not so far off, unless the ruthless destruction of them in the wild woods can be checked. There is no more beautiful garden shrub than Kalmia. It is easily propagated from seed in nurseries, and should be obtained from these sources. It is hardy and thrifty farther north than rhododendron.

Transplanting from the wild is precarious business with heaths, and the average person fails utterly. In the name of this genus, Linnaeus commemorates the devoted labours of Peter Kalm, the Swedish traveller and botanist, through whose eyes "the father of botany" saw the wonderfully rich and varied flora of the New World.