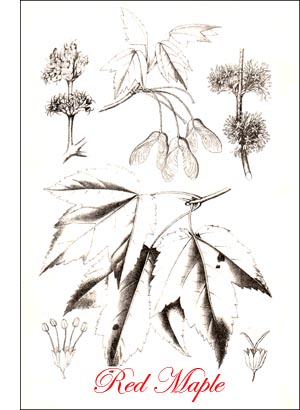 "The maple puts her corals on in May,
While loitering frosts about the lowlands cling,
To be in tune with what the robins sing,
Plastering new log huts 'mid her branches grey;
But when the autumn southward turns away,
Then in her veins burns most the blood of spring,
And every leaf, intensely blossoming,
Makes the year's sunset pale the set of day."
-Lowell

Who shall know the red maple better than this poet of New England? Yet it must be a sadly belated tree that blooms in May. Her May corals are the dainty keys which swing in graceful clusters from the twigs, each one red as any cock's comb.

It is fine to watch the spring come on in a region where the red maple grows. Late in March a rosy cloud lies on the wooded marshes and stream borders. Up the hillsides the same colour tells where there is a clump of these trees. The grey branches glow with their "crimson broidery" long before any but the poplar trees and pussy willows show their blossoms.

Go as early as you will to examine these maple flowers, the bees are there before you. Their motive is a selfish one, but while they swing from one bell to another in quest of nectar they dust with pollen the red forked tongues of the fertile flowers. This insures the setting of seed. The reddest flowers are the fertile ones; the sterile ones, fringed with yellow stamens, are orange coloured.

The two sorts are isolated on separate branches; often on separate trees. As the leaves appear, the colour deepens. The lengthening bud scales and the opening leaves are deep crimson at first. Then come the ruddy fruits, which set the trees aglow, and which fall in early summer, leaving only the red veins of the leaves to bear the colours of the tree until late August or September. Then of a sudden the tree stands clothed in scarlet! It was not so yesterday. And one by one the leaves fall while yet fresh and smooth.

There is no more desirable tree for the home grounds, for parks and roadsides than the red maple. It is quick and sure to grow in the East if the soil is moderately rich and moist. Young trees are trim as beeches in their snug pale grey bark. The frame of the tree is admirably adapted to. resist breaking in the wind. The branches are short, numerous, erect, not heavy, nor spreading enough to be torn loose from the trunk as the silver maple's so often are. The tree is beautiful at all ages and through all seasons, and it has no bad habits.

As it comes quickly from seed in the woods, there can be no objection to taking up woodland saplings for home planting. Or they may be obtained from nurseries. If seeds are desired, collect and plant them in early summer; they will not, as a rule, germinate if kept until the following spring. Nature gives helpful suggestions. The woodland carpet and the neighbouring cornfield show a forest of tiny red maples under six inches high by the middle of summer.

Unfortunately, the silver maple, a quick, cheap and sure grower, has been exploited by nurserymen to the overshadowing of the claims of its handsomer but more exacting relative. It is rare to see a red maple in the upper valley of the Mississippi, though its natural range covers these states to western Iowa, and along the lower course of the Ohio River and following the "Father of Waters" it becomes a dominant tree in wet land. Nurserymen near Chicago complain that it is hard to get good seed; that the tree grows very slowly at first, and the dangers of drought and hard winters make the cost of one red maple equal to that of ten silver maples. One of these days people will realise that it is ten times more beautiful. Then the study of its preferences and peculiarities will pay the nurseryman, and the tree will be more generally and successfully planted to supersede the silver maple in the moist soil and humid air of the North Central States. It is a foregone conclusion that a swamp-loving tree would die of thirst on the plains. Nebraska and Kansas have tried in vain to introduce it.

Nobody knows what red maple log is going to reveal the beautiful curly and bird's-eye grain when sawed into boards.

The sharp eye of the lumberman detects it, and the boards are put aside. They are worth far more than plain, sound lumber of the same species. Hard maple and red maple are the kinds most likely to display this variation from straight grain. Some lumbermen boast that they can "spot" the standing trees; others declare that there is no outward sign that is dependable. Injury to the bark tends to set a trunk to sprouting. Often a multitude of small twigs cover a considerable area, close together, and have only vigour enough to keep their terminal buds poked outside the bark-sometimes not even that-but they still live. Each is the centre of a series of wood rings which are revealed when cut and polished as "birds' eyes" of the maple that veneers a bureau or a dressing table. Curly grain is not so easily accounted for. The wood fibres are longer than in straight grain, and lie upon each other in ripples. Beech often shows this grain, as well as maples and birches. There seems to be no explanation of the cause and method of its formation. In beauty curly maple often excels the more striking "bird's-eye" wood.

To saw a bird's-eye log in the ordinary way would be to lose most of the beauty of the grain, which can be got only by tangential sawing. A special method used is to take short lengths to a saw which cuts a thin layer from the surface of the revolving log. Thus a thin, spiral sheet that will measure one hundred or more feet when spread out can be pared from a single log section before the saw reaches the central pith. Steamed and pressed this veneer wood shows every eye it ever had.